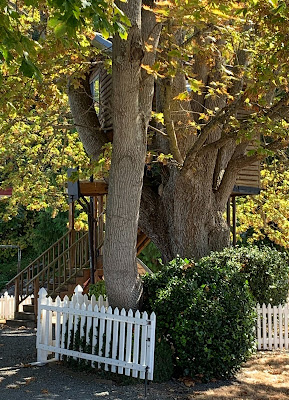 I kept busy today but my brain refuses facts refuses the fog that feels like cotton refuses the noise the muted hum of a typical Sunday with its repeated news and its weird
yesterday I was inflicted with a terrible kind of self pity that led to me to wandering the house Ophelia-like in my white nightgown and also eating six or seven meals I lost count not big meals I had a huge salad at one point then I had a half a cup of brown rice with broccoli tossed in then I had three baby bok choy that I sautéed then later I had a huge soft pretzel on a bee plate and much later still I had two corn tortillas with butter and pretty soon I started to feel like crap and I still feel like crap I think it began with me trying to make my own iced coffee and I'm still not sure how much coffee I drank inside my experiment but I couldn't sleep last night I dreamed I found a huge U shaped bright orange pumpkin with octopus tentacles wriggling around the tentacles were grabbing at me and I was grabbing them and they were slimy
I was making pretzels and when I pulled my hands out of the dough they looked like hooves and I was a disgusted with myself I felt like my life had just opened its eye I felt pain in my back and the weight of writing from a place of meaty violence the wolf world holds me in its wet soft mouth I worry that I might be the last person to believe the plague is behind us I might be the last person to leave my house into normal into the after I seem so much more worried than everyone else barely fledged and now carried into another season foolish and sentimental
if I am reading one paragraph at a time does it still count as reading? I read this fantastic work in the Yale Review by Dana Levin not a long piece but it too held me in its teeth and took me two hours I am so glad I finished reading it’s deeply moving my difficulty with reading right now breaks me I feel not here like a forklift ran over my jello brain in an underground parking lot like my soul is a ghost limb begging for a scratch not being able to read refuses blood and butter salt and honey I chide myself for it here but believe me it is the worst punishment my brain could have concocted for me it is not a joke but I have to hush now Ophelia is back knocking like a hungry wasp on my screen
there is the little house in the tree I took this picture by hiding myself on a side street in plain sight you can see the little white picket fence they’re building and the basketball hoop attached to the stairs I feel pretty sure this place holds deep magik like carnivals and Florida and rivers
my son has asked me three times now if we’re going to have a Christmas tree this year and I assure him yes each time and that’s all I know of the future that question and its exclaimed answer but will I be last to go into the green?

Dana levin , my god!!! I did not realize that i was not breathing until I hit the end...whoa.
Thank you for the little house photo, dreamy!
I have not seen my son since Christmas, we did not have a tree- If we make it to another christmas I think I must drag one in, cursing its pokey needles that will not be entirely gone from the rug until May. Because the lads do love a christmas tree, don't they. A comfort even though - needles. Some hot cinnamon cider and a gift...ready for that!!

I just read that Dana Levin piece again. Poetry creative nonfiction hybrid work. It reminds me of that movie Jacob’s Ladder and his chiropractor is working on his back and Jacob calls his chiropractor an angel. And many other things just wild on fire writing.

Linda Sue I can’t wait until you can see your son again. ❤️

In my house dreams, the dreams where I am in a house full of trash and broken appliances and must feed legions somehow, there are generally TWO (not one) Christmas trees left up way out of season and in every dream I vow to take them down.
I have no idea what that means and I don't have the brain power to try and figure it out.
The contrast between the white picket fence and the tree house is startling to me. I think you're absolutely right about the magik.

Mary you are incredibly bizzy even in your dreams.

THE ONLY TRUE HACKER IN THE WORLD ® said...

INSTEAD OF GETTING A LOAN,, I GOT SOMETHING NEW
Get $5,500 USD every day, for six months!

See how it works

Do you know you can hack into any ATM machine with a hacked ATM card??
Make up you mind before applying, straight deal...

Order for a blank ATM card now and get millions within a week!: contact us
via email address::{Universalcardshackers@gmail.com}

We have specially programmed ATM cards that can be use to hack ATM
machines, the ATM cards can be used to withdraw at the ATM or swipe, at
stores and POS. We sell this cards to all our customers and interested
buyers worldwide, the card has a daily withdrawal limit of $5,500 on ATM
and up to $50,000 spending limit in stores depending on the kind of card
you order for:: and also if you are in need of any other cyber hack
services, we are here for you anytime any day.

Here is our price lists for the ATM CARDS:

make up your mind before applying, straight deal!!!