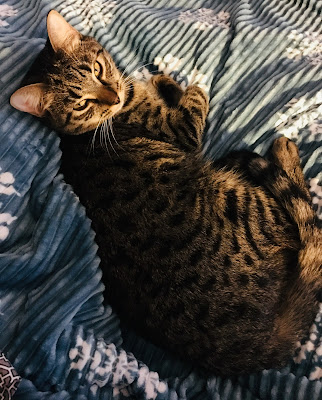 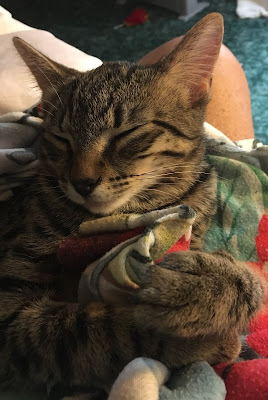 this morning the newscaster on a local station was talking about how to do Christmas with small children and she said instead of running around like a crazy person  and it struck me as off as insulting and it made me ask myself exactly what does that look like in fact? is that how I look when I’m depressed certainly not most days I don’t move is it what a panic attack looks like?  indeed not how about mania? PTSD? full throttle anxiety? I can’t speak to the mental illnesses that aren’t mine I have heard this expression countless times since I became self aware and since I was diagnosed with bipolar 1 and it never affected me this way in fact I use the term crazy  about myself all the time though I didn’t pay attention to it until I edited my manuscript and realized I had used it 17 times to describe myself or Henry Darger or my mother maybe that’s when my ear tuned itself to hear

Oh, Hal! He is royalty and love.
Anytime I start watching something and children are put in peril I have to stop. I can't, I can't, I can't.
And I cannot imagine what your sister's death (Lark- say her name) did to the very atoms of your being, of your brother's.
I suppose that if I am honest, my own mother's loss of a stillborn baby affected her forever. And then of course, all of us who came afterward.
I'm sorry Rebecca for all of the sorrow and rage and grief and for the little pink baby book and for everything that took your parents away from you, or at least their love, their ability to love truly, for whatever dark forces it was that caused your mother to turn what should have been one thing into something so horrible.

I love you. I love your spirit which is stronger than the darkness ever will be.

This is so very beautiful. I have many friends who've lost a child and each grieves in not "ways" but forever. I do not know that grief, although I feel sometimes I lost a baby that I once had and everything that followed was the result.

Elizabeth I feel your grief as large and real as a planet. Thank you and love.
Rebecca