Pig and farm report (with swears) 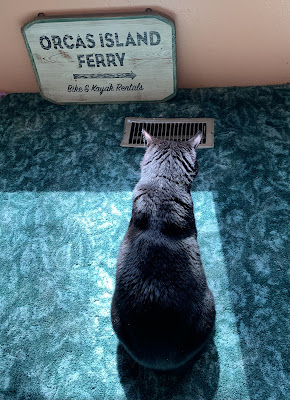 This is the week in which I did all the hard things an emergency plumbing incident that ended up with me calling the stinky septic guy turns out my tank wasn't full but he found the problem and fixed it very $$$ three headed dog no matter what then I went to the doctor for my yearly visit which meant an hour in his office with bruises up and down my arm from labs and then tip to toe inspection of my personal girly space then meds refilled then an ekg because even though I told Doctor Call Me Zack that yes I was having a panic attack at that very moment he still needed to have a look for himself but by the time he left the office and his girl Annie the Racist walked in to stick the thing-a-ma-bobs all over my chest everything looked normal my heart wasn't exploding at all! Doctor Call Me Zack came back in to tell me that I was not in fact having a heart incident but it seemed that I was in fact having a panic attack when I came into the office ignoring the fact that I ALREADY TOLD HIM THAT for fuck sake then he told me all my numbers were good but he wanted me to go back to the lab to have my sodium level checked again even though I told him my sodium level would be low because I adjusted my psyche meds ok! I said with gusto! OKAY! I'll head right back to the lab!!! then I breezed the fuck out of there because I had no veins left in my body no doctor police stopped me at the door (it’s shocking how easy it is to not do what your doctor tells you to do up to and including stepping on the scale and yet we [I] are raised to follow them no matter what

(that's a lie the plumbing was the scariest thing of all)

today is April the beginning of National Poetry Month and I am participating in the poem a day self torture last year I got to day two before my brains ran out so far so good here on April Fish Day at noon I'm going to get my second booster because why not because even though Doctor Call Me Zack told me I might not need it I don't trust him because at the beginning of covid he told me not to worry about masks that they wouldn't do any good (was he listening to our then pig-president?) and his nurse Annie the Racist told me she wasn't going to get vaccinated (though she’s assured me she since has because her children got them and should it have not been the other way around sad face emoji) still it can't hurt I am well over 65 and spent the early parts of my life smoking and coughing and getting bronchitis once or twice a year and almost dying of pneumonia a few times and better safe than sorry and if our now president can get a boosted booster then I'm going to

I sent my son to the store to pick up what I will need after my booster:
1. Strawberries
2. Aspirin
3.

look at Queen Jupiter staring down into the heater vent like its haunted cat but aren't all cats kind of strange that way?

Well, that certainly sounds like a fun filled week. Glad that it's all been taken care of successfully.

And that is why I never go to the doctor unless I am a gaping bleeding hole. GEEZ! Glad you went through the exit door with your arms still attached. Thanks for the reminder about booster- I just looked at my card and discovered that all ,
all of my jabs were dated the very sAME DAY...must sort that, then get another booster.

Carolyn hello! Plumbing being the it all be all when it goes wrong but at least I am good for another year ha we'll see.

Yes- that horrid fact that you can't get the meds you need to function on this earth without the actual doctor stamp of approval. "Call me Zack"? Really. Okay. Why not?
Woman- it sounds as if you've absolutely done all the hard things in the past week. I salute you. I send you a golden crown, a bejeweled bodice, a pair of silver slippers and oh, why not? A velvet cape.

Mary, I’m wearing the bodice and crown to the state park to pick up breakfast this morning thank you!