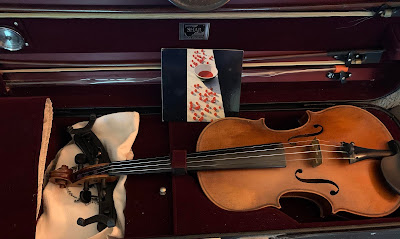 what are you doing?


Challah with honey and cardamom

I would read this recipe all the way through if I were you and you know I am before you start or be a show off and plow ahead!

1 1/2 cups warm water, divided (this tends to confuse me so it’s 1 cup then 1/2 cup sheesh)
1/4 cup plus 2 teaspoons sugar, divided
2 tablespoons (powdered) yeast
6 cups flour either all white all purpose or half white whole wheat
2 teaspoons salt
1/4 cup mild honey, plus an extra tablespoon for egg wash, if desired
2/3 cup flavorless vegetable or canola oil
4 eggs, plus one yolk for egg wash, if desired (I actually use an entire egg plus honey for the egg wash)
1 pinch ground cardamom, optional (I use one honking big pinch almost a teaspoon)

Put 1 cup warm water in a small bowl. Add 2 teaspoons of sugar, sprinkle the yeast over top, swirl the bowl just to combine, and leave it to proof for five minutes.

While yeast is proofing, mix flour, salt, 1/4 cup of sugar and cardamom, if using, in a large bowl (or in the bowl of a stand mixer fitted with the paddle attachment.) Stir to incorporate or blend on low speed.

When yeast has finished proofing, add it to the flour, immediately followed by wet ingredients. Mix with a large wooden spoon or on medium-low speed in the mixer, just until combined, about 30 seconds.

Switch to dough hook and begin to knead on low speed, making sure to incorporate what's at the bottom of the bowl if the dough hook misses it. If kneading by hand, stir using spoon until dough becomes to thick to stir.

Empty dough onto a well-floured surface and knead by hand until the dough is smooth and no longer sticky, adding flour with a light hand as needed, 7-10 minutes.

Split the dough into two equal pieces. Set each in a large oiled bowl, cover both bowls with plastic wrap or a damp towel, and let rise at room temperature until doubled in size. If using white flour, this should take about 2-2.5 hours. If using white whole wheat, it will take closer to 3.5 or 4. Feel free to let the dough rise in the refrigerator overnight instead; if you do this, be sure to set out the dough in plenty of time before shaping, so it can come to room temperature.

After the rise, the dough should be soft and pliable. Braid each ball. Separate each mound of dough into three equal balls, for a total of six. Roll each ball into a log almost 1-foot long. Braid the logs together to create your loaf. For the nicest-looking braid, do not pinch the top edges of your logs together before braiding; simply place one log over the next and braid until you reach the bottom, then pinch those edges together. Then, flip the unfinished loaf the long way, so that the unfinished edge is now at the bottom and the loaf has been flipped over and upside down. Finish braiding and pinch these edges together. This way, both ends look identical. Tuck the very tips beneath the loaf when braiding is finished. Repeat with second loaf.


this recipe came from Food52 and if you ask me the above paragraph is confusing as all get out PLUS the recipe doesn't say to let it rise a second time so I added that part also I posted a great youtube tutorial below below on how to do six braid loaves the first time I made this recipe I didn't understand that it was two loaves and made one giant toddler sized challot and ended up dropping that child sized loaf on the floor when I took it out of the oven and breaking its head! if you can work your way through those terrible directions go for it but I say ewww it's two loaves people two!

this has been a Radish King public service announcement

Put each braided loaf on its own silpat or parchment paper lined baking sheet. Let rise until doubled in bulk about 1 1/2 hours.

After the braids have risen (like Jesus!) brush gently with egg wash, mix egg with 1 tablespoon water and 1 tablespoon honey. Add sesame seeds and poppy seeds to the loaf after the egg wash if you want.


Bake at 375 degrees for 20-22 minutes, until challot are golden and baked through.

my notes:
you can find easy tutorials on how to braid challah online three strand challot is just like braiding hair this is my favorite ever tutorial on how to braid six braided challot when I first started making challah I watched this over and over and tried it on ribbons then I watched the video in my kitchen as I made my first challot and once I got the rhythm it became sort of easy and it's a good project if you're stuck in the house and the bread tastes fantastic no matter how you shape it and kids can get into this if they want even grown kids she also shows you how to add sesame seeds and poppy seeds either or both at the end to make it pretty

Notes being taken.
Thank you.

Hey is that a musician joke? 🎻

I haven't sung since my last rehearsal with my beloved chamber group. I'm afraid my voice has rusted out, but instead I'm trying to learn Debussy on my out-of-tune janky baby grand, which is something. I have resorted to ordering flour online. All i am doing is baking these days.

Keep singing. Will you tell me where you’re ordering your flour? Amazon and King Arthur is out. ♥️