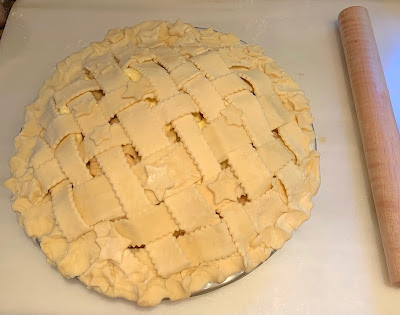 I made an apple pie my son’s favorite and had a slice for breakfast with coffee which was delicious which made me feel my tiptop best like crap
the neighbors have been shooting off fireworks since Wednesday fireworks that sound like cannons that sound like guns that sound like a rifle in my house
every year on this day I relive my trauma my PTSD reels me to the floor (my bed my little boat where I hold onto the sides as I capsize) I used to think PTSD was only for soldiers even back in the 1990s before I had a name for it my fireworks/extremely loud sudden noises anxiety cracked me through the roof which looked like my son becoming injured in a horrible accident or the house in flames or me losing my hearing or my cats running away the litany of woes dancing through my blood when I was still expected to show up to bring the giant bowl of potato salad make the pico de gallo with my tomatoes and peppers
bake
the pie
before I had a name for it before I stopped showing up to the parties and potlucks and social type visits and being hounded in my own skin before I stopped lying and saying sure sure I’ll be there before I learned to say no NO. no thank you not this time not ever and acknowledging strange it was to face my own goddamn disease and stop backing down before my child and friends realized it wasn’t me just not wanting to have fun
last night the guns fired in my house from 4 pm until well after midnight I looked at my calming app I wore noise canceling headphones I played white noise music I shut my windows and turned on my fan (I didn’t do any of these things) I just held onto the sides of my boat and hoped I wouldn’t die
my son and I are going to the store then to the beach I want spaghetti for dinner he wants normal holiday fare he wants to be with his father his father’s giant family
sorry bud, not this time
Namaste/toodle loo

The cook gets to choose the menu.

I've never seen a better looking pie in my life.

PTSD should stand for post traumatic suffering disorder. I'm so sorry you're having to suffer through this again.

Mary it’s done for now, mostly. Not exactly suffering just fight or flight tensing up. My whole body has been a clenched fist for a week.

Sometimes I feel bad for telling the truth about myself here sometimes I feel like a freak sometimes people want to fix me (the very worst) but mostly no one responds which feels naked exposed and weird. I decided a while ago to stop telling the not so great stuff here then I couldn’t write anything at all. We are all a mix of all the things.

That’s a beautiful pie. My neighborhood is terrible with fireworks, every single holiday. My poor Loki shivers uncontrollably and pants. It’s heartbreaking.
And yes, we are a mix of all those things. I admire you writing here at all, when I think of writing I freeze and lose my words. I really admitted your art journal and just getting to it. I’ve been wanting to do that for a very long time, but fear and uncertainty stop me. I’m working on courage.
Xoxo
Barbara

That should have been admired not admitted. Perhaps I need to be admitted!
Xoxo
Barbara

The pie looks divine. I'm glad the war noises are done for another year and the bed/boat can now right itself. I love you.