after that brutal hour and it was brutal because I made the very nice tax lady extremely nervous and she was all sweaty and shit by the time I left taking two pens (free) with me I got in my car and then BECAUSE GETTING MY TAXES DONE WASN'T STRESSFUL ENOUGH!!! I drove to the mall closest to me which just happens to be the mall where a mass shooting occurred in 2016 to buy myself a bra THE WORST POSSIBLE THING FOR WHICH TO SHOP IN THE ENTIRE UNIVERSE but my Coobie bras no longer do anything but smash my boobs into one tiny middle knob on my chest and the mall is very small I would use the word dead but my inner critic barked there for a second still there are maybe three stores and an eyebrow threading kiosk in the whole place the whole entire empty echoy mall I made it to Macy's found a bra and was back in Sweet Lime in under ten minutes I've lost so much weight because of sick I am down two cup sizes and the bra I bought today has air in the cups because they don't make child bras for old women so I'll have to cram some socks in there for filler 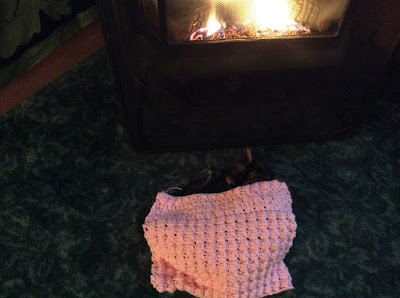 I have been gathering notes for Queer Wing-ed so far I have 115 pages of  notes (whittled down from 167 pages) all typed up clearly this introduction will need more extreme whittling it might appear untoward to certain editors if the introduction is longer than the actual manuscript itself unless I  can find a press willing to work with the whole damned thing as a hybrid (there is a press oh yes in my mind who would who would hello press! can you hear me?)

it  was extremely foggy at the beach this morning and raining weather as per usual the buffaloes were in their yard close to the road there is also a chicken in a pen in a yard who is completely black with a white cap of feathers he is spectacular I have named him Andy Warhol obvs.


in today's mail these fabulous Queer Wing-ed stickers if you'd like me to send you one leave a note in the comments
oooooo! 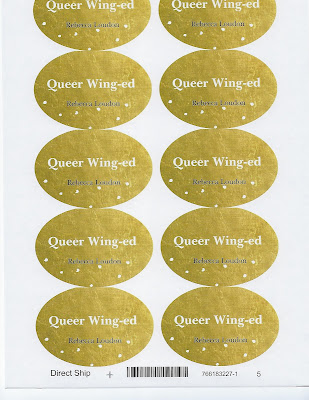 hello Darklings!
Hello!
I feel as if I've returned after an extremely long absense 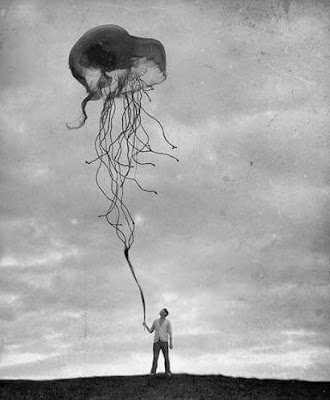 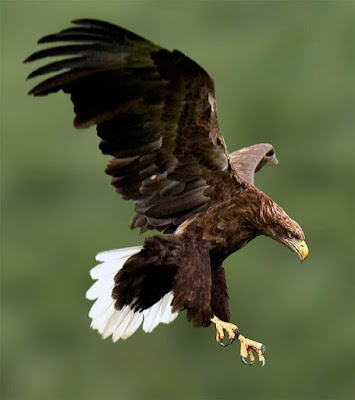 (obviously not my photo because it isn't fuzzy)

yesterday I drove to Bellingham which is 44 minutes away from Summer's End and 44 minutes away from Vancouver BC if I keep driving north I drove there to visit the Alaska Ferry because I had read about it once back in the olden days when I still knew how to read and was curious and yes indeed the ferry travels to Alaska it's a 38 hour sailing and I can sleep in my car or rent a cabin though I think Sweet Lime is probably more comfortable than a cabin on a ferry but still it can get me all the way to Ketchikcan for $1,000.00  I used to have $1000.00 but then I bought a house and beds and a table and furniture and etc so now I don't still I think it would be a superb summer vacation don't you?

I think my stomach problems which have plagued me since I was nine years old are in part the result of getting punched in the stomach so often as a girl I was the punching bag of a family full of angry people also when I was nine she i.e. You Know Who started giving me her diet pills which we called Black Beauties to stop my breasts from growing to keep me small to keep me like a tiny dog she could groom and torture

Good night Darklings
Did you know yesterday was David Bowie's birthday?
Did you watch the biopic about his last five years that was on the telly? 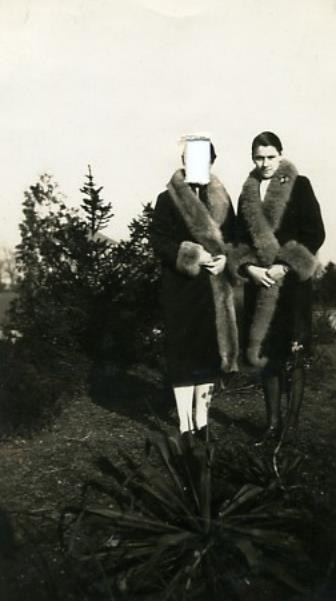 Put one finger down put the next finger down then begin again put one finger down put the next finger down. This is how to be a writer in case you have forgotten. In case your foot froze and fell off inside your boot and all you thought about was pain day after day. In case a child somewhere near you a grown child you loved died and you didn't get to go to the funeral. Begin. Put one finger down put the next finger down play the keyboard like a drum until your fingers bleed. In case you hear several fire engines just up the street on a Sunday morning in case you are getting divorced and moving to another house a haunted duplex with injured children living in it and your freshly minted ex-husband lets your feral cat loose a cat named Fledge named from C.S. Lewis's "The Magician's Nephew" a cat small in size but wild in imagination out the door and gone in spite of many warnings about being careful with the cat and you never find her even though you go to the old house the old neighborhood at three in the morning every day for weeks calling her name sobbing her name even though you put up posters Fledge never reappears because she doesn't know where her new house is. In case you realize the loss of your cat is much worse than the loss of your husband who had been lost all along. Put one finger down put the next finger down then begin again write it out make order of the Senseless World and Terrible America by putting one finger down and then the next in case your brother has a child he never gets to see in case that child is challenged from different from the start in case the child was born in a dank town then whisked away from your brother or you were whisked away and so you never knew each other put one finger down and then the next do it if you want to be a writer if you ever want to be a writer in case you were raped in front of your own goddamned house in a stranger's car put one finger down and then the next this is how. you. do. it. This is how to write. Open your mouth outside on a wintry day and see if birds don't fly out any kind of bird see if they don't fly right out on your plumed breath riding your breath like a Robert August surfboard. Cover your ears and open your mouth to hear the birds talk one to another in whispers. This is how to do it. One finger at a time moving forward over the waves that's right now get up and scream your fool head off. One finger at a time. 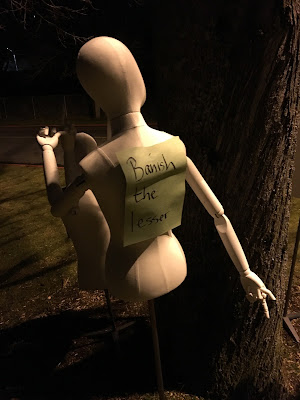 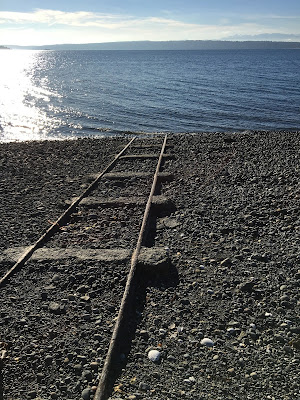 afterwards I came home and worked on my dumb blanket (seriously I really have to learn more than two crochet stitches I'm 9/10ths of the way finished and I'm bored with it) then I swept my kitchen floor then moved all the chairs into the outer outer room then pulled the table to the center of the floor and scrubbed said floor with vinegar and water by hand one towel washing one towel drying but that's not what's on my mind today I am thinking about trees and birds about trees vs. forest how first there was forest and then there were trees then there were specific trees and the forest became larger and deeper and smaller and more intimate as I learned each tree then discovered the faces in trees the trees that look like dragons or dogs trees that have vaginas and teeth this is all so prosaic so I will skip the bird conversation for today


dumb blanket plus Jupiter whose birthday is tomorrow 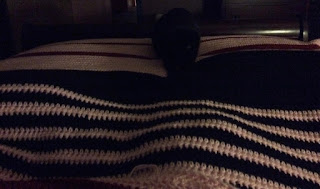 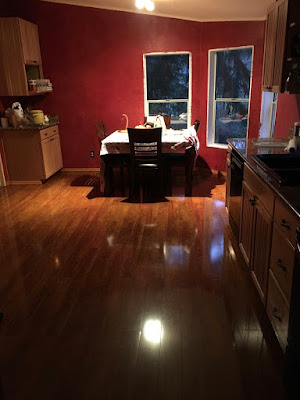 Raging loneliness lonesome lonely radical aloneness continues. Certain music makes it worse. Mozart definitely. Romantic or thoughtful movies or movies featuring an animal. One or two poets wreck me every single time. I know it’s me it’s my doing it’s my entirely fault. I accept the breach. Every Friday night late I put on my best silkies and fanciest shoes and prettiest dress and I make my hair full and satin I check the mirror my god I look beautiful and vibrant I look at my front door my telephone I look at my car outside with its brand new perky flywheel its fragrance I look at the computer the names and numbers hidden inside I go to my bed after that and crawl under the covers shoes and all and pleasure myself then smoke an imaginary cigarette in a deep sinkhole of lonely and cry hot animal tears and sometimes I sleep and sometimes I lie awake and consider doing it again on Saturday.