I have been awake since 4:30 this morning listening to the rain caught in a bit of fairy magik during the quiet that happens when waking after my guts feel sorry and strained then calm it’s still dark one or two cats purring at my feet or near my side the day has not yet intruded my email goes untended the house is settled the day still out of reach shiny as a wrapped present and I read a little bit usually the online version of The Paris Review or some other journal to the blue glow of my iPad this is when my brain works at maximum flow this is the time in which I should write but more often than not I just lie in bed under my snow white comforter and bask until the owls hoo their wake up question I don’t know when exactly I became a morning person I think it must have been when the composer disbanded the orchestra and I stopped going to rehearsals every Tuesday at 7 pm then went out after to The Berkshire Grill with everyone until very late then woke too early to get to work on time I used to practice at night and write at night inside my most creative self but now that I have the forest and the sea to care for mornings have become touchstones they have become magik the fairy time in between sleep and solid wakefulness 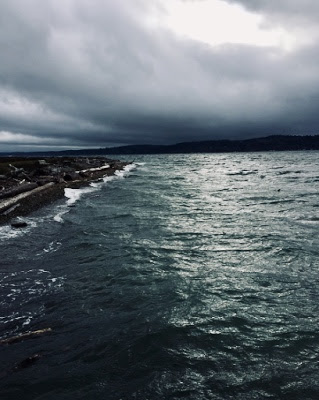 That picture.
And this: "...but now that I have the forest and sea to care for..."
My three youngest grandchildren are coming out today and so of course there will be magic here. They will indeed hold back the shadows with their very own magiks. I really don't know what I would do without them.

Dear Mary I love you and the strong tender care you bring to my world and yours and those grand grands.
❤️

I have already found my spark of magik here, visiting with you and your great big tender heart. The woman ambassador who testified this more was telling the whole truth with toughness and a woman's sense of the world. i couldn't look away.

Darling R she is riveting and strong and amazing and she has clearly enraged the beast. Good for her. I love you thinking of you there in solidarity ❤️

The day still out of reach. I like that.(That boy walked into school on his birthday, shot his fellow students then shot himself in the head. It makes me so ineffably sad.) What kind of cookies does your son bake? As the dear dishwasher so often asks: how do we reconcile the beauty with the horror?