it was a serious flurry
SERIOUS

once the duvet cover was washed and dried it took me three hours to wrestle it back onto my comforter and my shoulders and back ached from it because I am more than a little bit weak and it is a horrible thing to do and there is no goddamn easy way around it like folding fitted sheets but wouldn’t they be easier if the buttons or zippers on a duvet cover were on the side instead of at the bottom?

I had some other things I wanted to tell you revelations large and small for instance how eye opening and liberating it was to realize that I can just say no when asked to step on the scale at a doctor’s office a horrific trigger point for me that wakes up my early abuse memories it isn’t against the law to do so just.         No.     but I’m tired again and I have bread dough to stuff 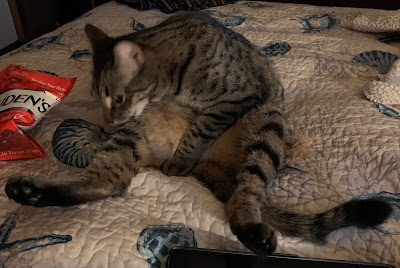 You're right about getting the damn comforter back into the duvet. I just don't do it. I leave it naked. Poor thing.
I hope you can take some pictures of your stuffed bread. I want to see it and be inspired.
One of these days, science will catch up to the fact that humans need to smell the real world of growing things and waters, both salty and un-. We need to smell the decay of leaves into dirt and logs into mulch. I truly believe this.
The apple trees- that is a sadness. I'm sorry.
One of the reasons I fell in love with Lis is that when we were first young in our relationship she told me that when she'd gone to the doctor recently and they asked her to step on the scale she said, "We won't be doing that today."
I'm glad you're feeling better and I hope you don't overdo.
Prince does the same yoga as my cats who are also both graceful and majestic.

Hi Mary! Here is the stuffed bread oh god I patted myself on the back so hard with this beauty.
XO

As well you should.

Just saying no the doctor’s scale is a revelation! Why did this never occur to me? I love thinking of you on your deck, taking the forest with five senses. Tasting air. Love.

I figured this out a year ago last July when I got furious at dog nurse for demanding I get on her scale. I thought about it parceled it out and realized that 90% of my nervousness and panic at going to the doctor stemmed from exactly this. It honestly changed everything for me.
Love
Rebecca