I am nervous as a mother with a colicky newborn

Jupiter sneezed out blood yesterday
I think she might have an upper respiratory infection
or something else who knows
taking her to the vet at 3:40 this afternoon

I have been sick (again) for a while it feels like forever I have been flat in bed with Jupiter playing around me or sleeping in my armpit or talktalktalk talking she is a very talkative young cat she is no longer sequestered all the time now I take turns letting The Evil Orlando have the run of the house then Jupiter gets the run of the house and Orlando gets sequestered etc. and for a kitty who just got spayed and vaccinated and had a chip implanted and a broken hip then had to live in an animal shelter she is feisty and good-hearted and she adores TEO and has acknowledged TEO's dominance even though Jupiter is twice Orlando's size they have sniffed each other and touched noses but Orlando only has about ten seconds of Jesus love in her heart when it comes to Jupiter but this is easy going and I think in another week they will exist side by side then they will be friends Orlando has always had a companion cat


when I first had this house appraised I asked the appraiser if there were any rodents in the crawl space under the house and he said rather snootily you realize you're living in the forest right? and I was schooled I have caught two in mouse friendly cages and released them into the woods Jupiter is less kind and much more efficient and I praised her for (oddly to me for a second) howling and stalking the cupboard in my bathroom and then she dispatched mouse with the precision of a Celebrity Chef and that was that

this morning I was able to eat some yogurt then I went out to the deck in my nightgown armed with a toothbrush and some clean water and I scrubbed the bird bath and thanked St. Francis and then I came back in the house and baked an herbed omelette with goat cheese five eggs and cream and gruyere for my son's Sunday visit

She's two years old and is healing from a broken hip. I adopted her this morning from the Camano Island Animal Shelter. 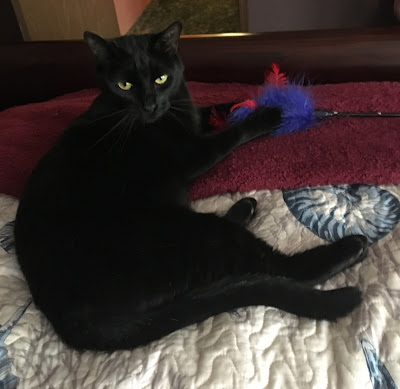 We are all in stupid love here at Summer's End. 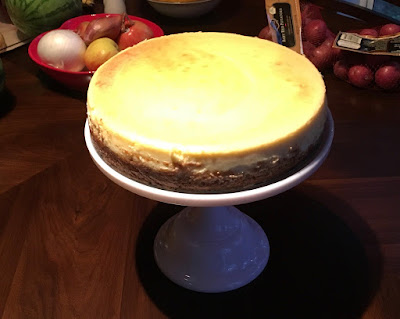 I am notating . It is inside an oven inside my face a red sky sloop-down weeppweepweep. I am stained beyond anything that might occur in the bathtub at night. In the morning [L] sat on my chest and begged that my fever and I stay home stay home he was the Magicker sleek and black we are dizzy with mustard pricks. I cried and the phone flung itself out of my hand. My throat is a yellow eyeglass. My lungs are wasps. To-day. Just sit. To-morrow the same. Sunday I will go to mass and beg forgiveness. 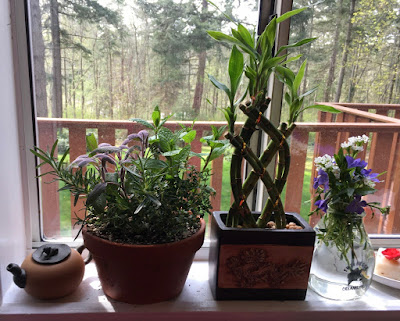 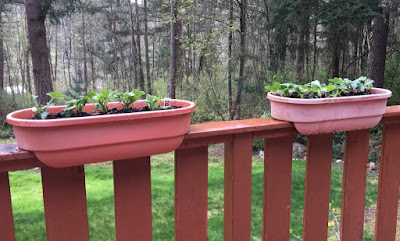 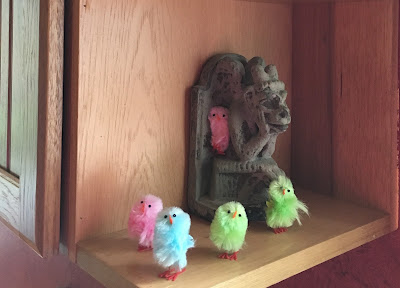 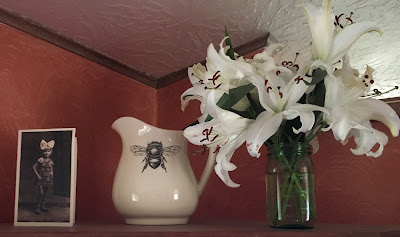 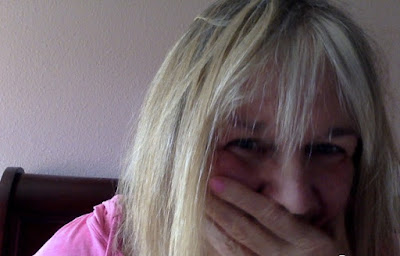 ps. my son took that last one and I'm laughing not puking though that's probably how I look right before I puke I don't know as that involves horrible retching and not posing

Here is what "The Bible Gateway Drug" says about Holy Tuesday


Seeing a fig tree by the road, he went up to it but found nothing on it except leaves. Then he said to it, “May you never bear fruit again!” Immediately the tree withered.
When the disciples saw this, they were amazed. “How did the fig tree wither so quickly?” they asked.
Jesus replied, “Truly I tell you, if you have faith and do not doubt, not only can you do what was done to the fig tree, but also you can say to this mountain, ‘Go, throw yourself into the sea,’ and it will be done. If you believe, you will receive whatever you ask for in prayer.”

I don't think so

1. I was looking for the email address of an old friend when I discovered an archived email I sent to myself when my computer was dying in 2013. The email contains 10 Henry poems that I completely forgot about. HOLY SHIT I THOUGHT I WAS FINISHED WITH THE BOOK VERY GLAD I HAVE YET TO GIVE IT TO A PUBLISHER.

2. I forgot the second thing on account of I got so excited running into Henry just four days before his 150th birthday.

this is probably my favorite Bible story because Jesus had just traveled all the way to Jerusalem only to find the nasty money lenders (banks, those payday cash loans places, creditors, bill collectors, slumlords and the IRS) doing their business in the temple and he turned their tables over and coins flew everywhere rolling along those stone floors into god knows what kind of crevices forever then Jesus whipped them with his donkey stick until they bled and created the Red Sea meek and mild? I don't think so

and I cried of course 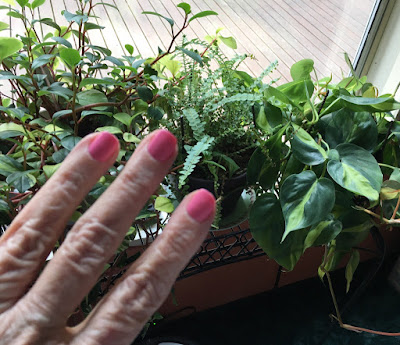 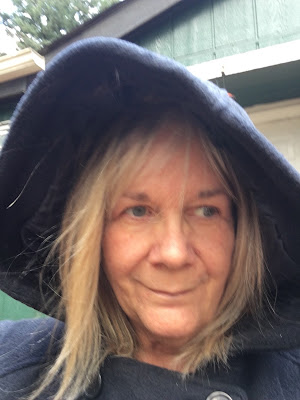 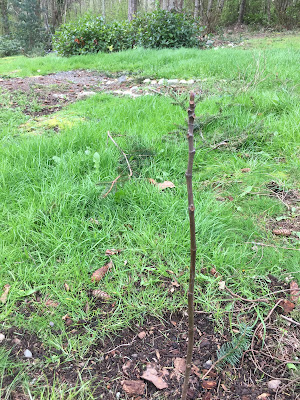 I dug up my Lady In The Bathtub/Bleeding Heart/Dicentra Spectabilis (which sounds like a wizarding spell from Harry Potter) in the dead cold of winter during my move here and threw it in a pot hoping it would survive and look what I discovered this morning! JOY! 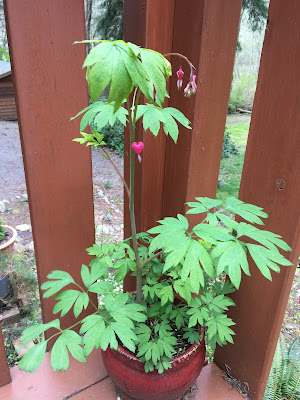 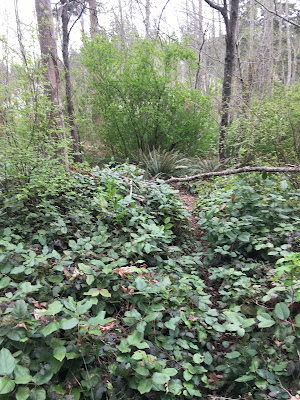 here I am looking exactly this fuzzy and tired and exhausted HELLO! her pancreas screamed on the brink of 64 years but I still have the best hair though I haven't brushed it in three months and prednisone has given me squirrel cheeks also YES I STILL HAVE MY NIGHTIE ON but I wash it every day almost 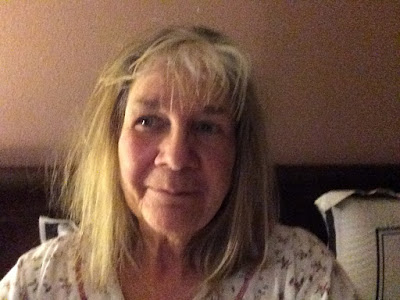 here is the window that was not going to be a bookshelf but now is (I need to buy two more large bookcases but this month I paid taxes on the house and bought a chainsaw so the bookcases will wait or I will find them with a FREE sign on them in a stranger's yard) with a macaroni and toy necklace my son made when he was three in daycare on the left and on the other side is the stuffed satin Sufi heart I made when I lived on the mountains that I've held onto for all these years (just a few scant years later I got that heart tattooed on my back but that is another post except for the fact that when I was recently in hospital one of the very young nurses asked WHEN DID YOU GET THAT TATTOO? and I answered 1907 because no one got tattoos when I actually got that tattoo and I really think that most youngsters these days getting heavily tattooed don't think of how that tattoo will age as their bodies age I guess most youngsters don't actually believe they'll age at all) and a small painting by Angela Simione but I digress much better than I digest 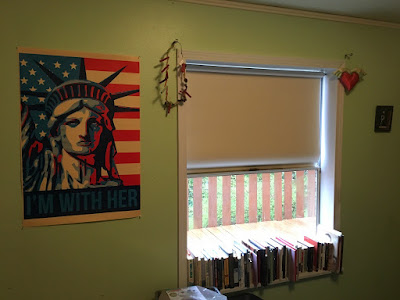 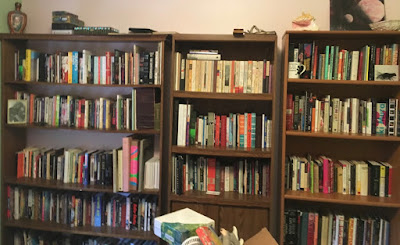 The truth will set you free, but not until it's finished with you.
~ David Foster Wallace